Our gas got hooked up a week ago, which means we've had seven blissful days of a temperate, evenly heated house.

Before that could happen we had to run the ducting, as part of the deal we struck with the gasfitter. This took us a few days - partly because our work is often interrupted by a small person, and partly because we hadn't done it before so were working things out as we went.

The first snafu was on the very first join. We put the small one down for a nap, climbed into the roofspace, got the duct tape out... And second-guessed ourselves. The gasfitter had given us a quick lesson on how to tape the ducts up when he brought the kit around, but we wanted to refresh ourselves. So we googled. And (possibly for the first time ever), it wasn't helpful.

Ducted central heating is most common in the United States - but all the US videos we found recommended against using duct tape, instead suggesting mastic glue and cable ties (the adhesive on the tape softens when exposed to heat, meaning the tape can let go when the system is in use). However, the videos all used metal junctions (ours are plastic) so we weren't sure if the advice translated to us.

After a bit of (read: extensive) discussion and a chat to the gasfitter (who stood by the use of tape only) we decided we would get some cable ties, and use them with the tape for good measure.

(aside: it seems ridiculous calling them "cable ties" when they are wrapped around a 350mm diameter duct, but - correct me if you know otherwise - that seems to be the term used here. I guess sometimes bunches of cables might get that large?)

Once we got into it, running the ducting was pretty simple: the objective is to keep the runs as straight and smooth as possible, so a little bit of thinking ahead is advisable. Though not what we did, with the benefit of hindsight I'd recommend laying out as many ducts as you can to see where they sit before connecting any. As well as trimming the ducting to length, hanging bendy bits (e.g. where it joins the ceiling vents) to ease the angle of the bend is recommended.

We were hoping we might be able to reuse some of the ceiling vents from the HRV, but these weren't ideally placed; most of them were close to doorways, and the heating vents are supposed to be as close to the outside of the room as possible. We have reused one upstairs, in the dining room / kitchen, which has three vents in total so one in the middle made sense, and currently both downstairs bedrooms are using the HRV holes, because we were loath to cut new holes in the recently painted, good condition gib... But we'll see how performance goes and move them if we need to.

The trickiest part of vent placement is working out where they can sit - that job really needs two people, so one person can check out location in the room and the other can check for joists etc in the roofspace above. We did a bit of knocking and talking to try to roughly work out where we were, and then I would drill a hole from below in the centre of the proposed vent hole. My husband would then check from his side that the hole wouldn't hit anything and if it was good I'd draw a circle (the vents came in boxes which included a template, very helpful, though we could have made our own).

Once the hole is there you poke the duct down through it, tape/cable tie on the vent, and push it into the hole. We also had to do a bit of jiggery-pokery (technical term) on a few of the holes, as our old house has several double ceilings so the clips on the vent didn't always work as perfectly as they ought.

We also had to construct a return air duct - basically a chimney which takes the cooler air back up to be heated again. This has to be central (and is a large part of why the outlets need to be on the outside) so has consumed a large part of our hall cupboard. Our box is built out of MDF and chipboard; MDF on the visible side, for a good paint finish, and chipboard because we had a lot of it going to waste and it will do just as good a job. The most important functional outcome was for the box to be airtight, so plenty of sealant has been applied to all the joins. 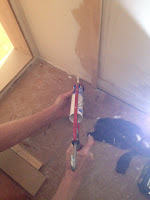 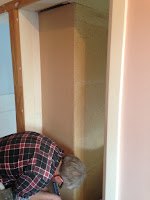 Because we would have boxed it in anyway we chose to build the box to the top of the cupboard and attach the duct at ceiling level, rather than ducting from lower down. 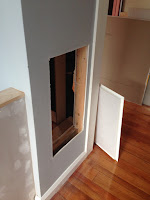 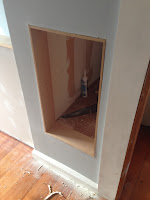 The inlet vent, which is mounted on the size, sits in a nice, snug hole - it has to be removable so the filter can be cleaned, so the lesson here is measure twice, cut once! Once the wall had a hole in it we cut pieces of MDF to line the cavity so the air goes into the box rather than up the wall.

This is the least pretty part - the big return air vent - but it's no worse than a heat pump... I guess most heating systems have ugly bits.

We're pretty happy with how it runs - we're still fine-tuning a little but it's glorious to get up to a warm house... We are keen to see our first gas bill though!

I'll share a bit more about the pros and cons, the fine-tuning process and costs next week... Stay tuned!
Posted by Unknown at 2:29 AM